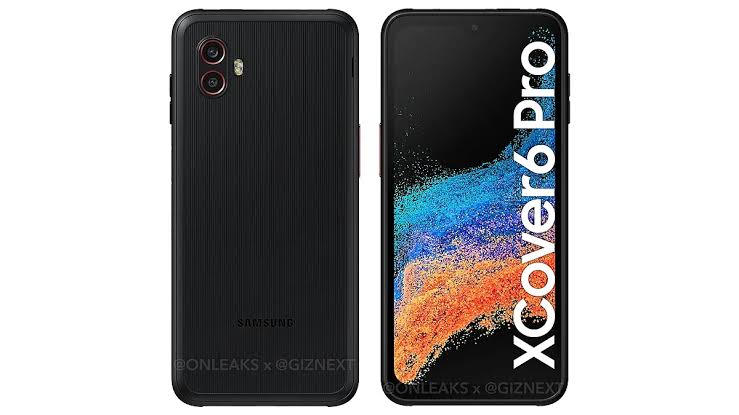 As per Samsung’s timeline, the company has launched its next-generation rugged phone, the Samsung Galaxy XCover 6 Pro.

This new phone with three resistors, now available for purchase globally, we are talking about the first rugged phone from Samsung that supports 5G networks in addition to Wi-Fi 6E.

It is paired with 6 GB of RAM with 128 GB of internal storage, which can be expanded up to 1 TB via a microSD card.

The selling points of this device are different from those of other phones, we said it is a rugged phone with three levels of protection, as the Samsung Galaxy XCover 6 Pro has an IP68 dust and water resistance rating as well as the MIL-STD-810H military standard certification.

Samsung claims that it can be used even in the rain or while wearing gloves, the phone has Corning Gorilla Glass Victus + protection, the dimensions of the phone are 168.8 x 79.9 x 9.9 mm with a weight of 235 grams.

As for the cameras: the Galaxy Xcover 6 Pro comes with a dual rear camera, with a resolution of 50 + 8 mega-pixels, in addition to a 13-megapixel front camera.

Regarding battery and power: What distinguishes this phone is the removable battery design, meaning that users can simply replace the 4,050 mAh battery at any time when it is exhausted. The device supports 15W fast charging power, and also supports the POGO charging function, which can charge several accessories at the same time.

For those who work remotely, the Galaxy XCover 6 Pro features Samsung DeX, which allows an external monitor, keyboard, and mouse to create a portable workspace.

The phone also runs Android 12, and surprisingly Samsung promises up to five years of security updates and four One UI and OS upgrades.

The device supports Dolby Atmos and has two programmable buttons, including the XCover and the top button, so they can perform specific functions, such as launching apps.

Samsung is putting together the new Galaxy Xcover 6 Pro with a bunch of new wallpapers. The device has a total of 19 stock wallpapers, the set includes three dex wallpapers, one live wallpaper (the same one seen on last year’s Galaxy A52s), and fifteen built-in wallpapers. Although there are only two new wallpapers in the set, the other images are the same as seen on many Samsung 2022 phones. The new wallpapers have a resolution of 2408 x 2408 pixels, so you don’t have to worry about the image quality. Below is an image preview of the new wallpapers.