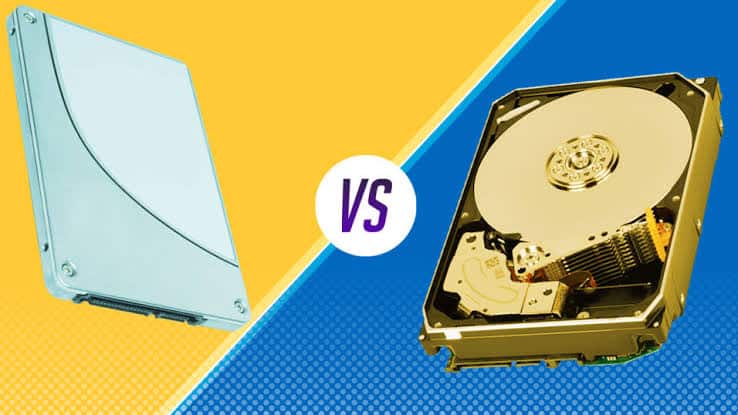 What is the difference between SSD & HDD

With the development of technology and technology, companies released many new generations of laptops, and in this regard it was necessary to know all the technologies associated with these computers, either out of general knowledge or out of desire to acquire one of them, so I recently noticed the ignorance of some of those wishing to buy computers Portable, as they only ask about the processor and do not bother permanently to the generation of this processor, and the same problem is repeated with random access memories or RAMs, as they only inquire about its size while ignoring the question about its quality, is it DDR2 or DDR3 or other … But the great catastrophe, in my opinion, is the ignorance of the types of hard drives and their differences and differences, as the latter is one of the most important components of a laptop that is indispensable.
In our next post, we will learn about the types of hard drives, their advantages, their differences and superiority over some, in addition to their price.

The hard disk in the useful noun is the main storage unit in the computer as it is known, and one of its most important features is the storage capacity and response speed, in the current market we will find three types

It is currently used in all computers, as it consists of magnetic disks that rotate at a certain and regular speed per minute, and an electromagnetic sensor reads from and to the magnetic disk.

It is a storage unit that combines the hard disk and hard disks, as it connects both the SSD disk and the HDD disk so that the first works as a flash memory while the other remains as the primary storage disk.
As for the differences, the biggest differences revolve around several factors such as weight, speed, power and speed, noise, and we do not forget the vibration, but in general, SDD disks are far superior to their HDD and SSHD counterparts. Among the manifestations of this superiority we mention technology such as the system booting faster because there are no moving parts It is mechanical in the SSD disk, and it is faster in random access to read as there is no head for the pickup to read or write as it does not emit sound because there are no moving parts or there are no cooling fans in the low capacity pickups, but it should be noted that in exchange for these advantages there are disadvantages, which are Higher levels of temperatures, the hard disk works at an average between fifty degrees Celsius, while the SDD disks have an activity level of 70 degrees Celsius, and some reach higher levels than that.
In the event, dear reader, you did not understand the meaning of these lines, then you should not, please watch this video, which summarizes most of what I wrote, as it places the difference in speed, take off and run programs.

An SDD’s also a well-known disadvantage is the price, as this type is blamed for its exorbitant price. In addition to the above, one of the disadvantages is the small size, as the maximum space for the SSD is approximately between 320 and 512 GB only, while the HDD reaches 4000 GB.

Read also : How to Download Ubuntu Font for Android